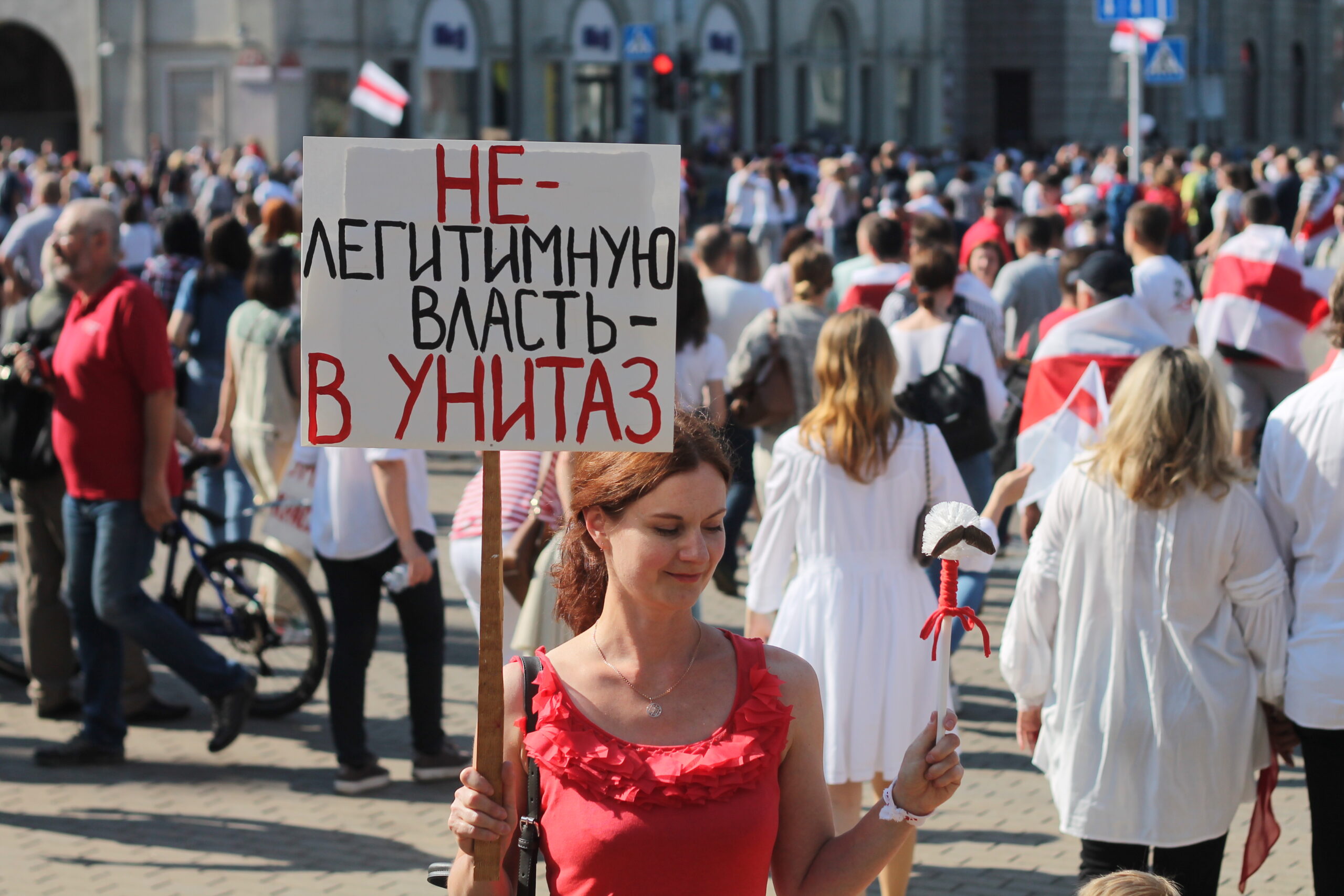 Lara Brett is a MA student in Contemporary European Studies at the University of Bath.

2020 was a turbulent time for everyone, but it also saw the amplification of ongoing political upheaval in eastern Europe. In Belarus and Poland, there is growing discord between authoritarian governments and the freedoms demanded by their citizens. In both nations, women have taken a leading role in the protests, but have often faced harsh repercussions. This post aims to highlight the contributions of these female activists in challenging patriarchal and autocratic governments in an effort to advocate for a more equal society.

Women’s rights, democracy and healthcare – a triple crisis in Belarus

Lukashenko has been Belarus’ President since 1994, earning him the reputation of ‘Europe’s last dictator’. He has close ties with Putin and has been accused of voter fraud and ill-treatment of political prisoners.

In 2020, Sviatlana Tsikhanouskaya, a former school teacher, took over her husband’s opposition candidacy after he was arrested for criticising Lukashenko’s regime. Although Tsikhanouskaya’s subsequent victory was recognised by the EU and independent watchdogs, Lukashenko refused to accept the result.

Week-long protests broke out across the country, at huge personal risk to Belarusians. Hundreds were arrested and there are reports of torture and rape in prison. Lukashenko said Tsikhanouskaya ran the campaign from her kitchen, leading a campaign of sexism and intimidation designed to silence her. Consequently, Tsikhanouskaya fled to neighbouring Lithuania. She fears for her own safety and that of her children. Nevertheless, she continues to advocate for democracy and the release of political prisoners.

“Protesters not only face the threat of political imprisonment but are actively risking their health and that of their families to call for democracy.”

In particular, female journalists are targets of the regime. In February 2021, reporters Katsiaryna Andreyeva and Darya Chultsova were both sentenced to 2 years in prison for covering anti-government protests. Fellow journalist Katsiaryna Barysevich received a six-month sentence for reporting the death of a protester.

The criminalisation of political and media opponents allows Lukashenko to cement his power but deprives millions of Belarusians of their freedoms of speech and political association. This particularly affects women. According to the UNDP, Belarussian women are generally expected to prioritise domestic tasks and there is a 27% gender pay gap between the sexes. Hence, it is harder for women to advocate for their rights, which the pandemic has exacerbated. Caring responsibilities have fallen disproportionately on women, many of whom have lost their jobs or faced reduced working hours. Lukashenko’s refusal to combat the virus has driven the country’s healthcare system to near collapse, further threatening women’s safety by failing to protect them from the virus. Protesters not only face the threat of political imprisonment but are actively risking their health and that of their families to call for democracy.

Women like Tsikhanouskaya, Andreyeva, Chultsova and Barysevich work in repressive circumstances but are a powerful force for hope. By highlighting the regime’s failings, they give citizens the information needed to fight for change, and the inspiration to do so. The regime’s efforts to threaten its female opponents have ironically had the opposite effect. Despite the imprisonment of female journalists, Belarusians continue to protest and Tsikhanouskaya continues to lead the way. In Belarus, knowledge is most certainly power.

Similarly, women have been at the forefront of the opposition to the Polish government. Poland’s ruling Law and Justice party (PiS) has undermined the impartiality of the country’s judicial system with a series of restrictive laws, effectively installing judges who are loyal to the government. Those who criticise the government have been discredited in the media or even referred to the European Court of Justice. According to the Commission, this may constitute a violation of EU law. However, this has enabled the Polish government to amend existing abortion laws, something it had unsuccessfully attempted in 2016. Under the new changes, women may no longer undergo an abortion if the foetus may suffer from abnormalities, which had constituted 98% of the roughly 1000 legal abortions that take place in Poland every year. Now, abortion is only legal in the event of incest, rape or birth that would put the mother’s life at risk.

Despite nationwide protests in October last year, the new legislation came into effect in February. This now gives Polish women two choices: either travel abroad for a safe and legal abortion or risk an illegal and dangerous procedure at home.

Polish women have fought hard to defend their autonomy. 2016 saw protests in 150 Polish cities, known as Strajk Kobiet. Protesters carried umbrellas and wire hangers to symbolise their loss of reproductive rights, culminating in Black Monday. Marta Lempart, a lawyer turned construction manager, started the protests, inspired by the success of the 1975 Women’s Strike in Iceland. Despite the protests’ success in 2016, the government pushed forward its anti-abortion agenda in 2020, triggering fresh waves of demonstrations. Once again, Lempart led the way. She currently faces 40 charges, including “destroying the environment by using a megaphone in public”.

By depriving women of the right to choose, the government is essentially exercising control over women’s bodily autonomy. Under the guise of promoting family values (often those promoted by the Catholic Church), such institutions ultimately make it harder for women to enter the workplace and retain their independence. This may force women to become mothers when they are not emotionally ready to do so, may not want children at all or force women to stay with abusive partners for lack of alternative financial support. Such issues may prove emotionally damaging for both mothers and their children, threatening their quality of life in the years to come. Giving women the right to choose allows them to make the best choices for themselves and those around them.

Where the EU currently stands

According to EU law, abortion remains an exclusive competence of the member states. Although the European Parliament has expressed concerns over the changes to Polish abortion law, the PiS was able to proceed virtually unopposed by the EU. The EU is a staunch human rights defender, but abortion is outside of its remit. We are seeing the traditional family values favoured by right-wing conservatives and the Church collide with the feminism promoted by more progressive members of society. At what point does this stop being a difference of opinion and start being a cause for concern? I would argue we have already reached this point but doubt that the EU would sanction Poland. The recent Covid crisis has exacerbated existing divisions amongst the 27 and I predict the EU is more unlikely to turn its attention to such a controversial topic. This may come at the expense of women’s bodily autonomy.

“Women in Belarus and Poland have had to contend with simultaneous health and democratic crises, risking their autonomy to protest. They are the ones most likely to suffer, but also the ones best placed to make a change.”

Similarly, the EU has taken limited action over human rights violations in Belarus. Sanctions against 88 individuals remain in place until February 2022, limiting their ability to travel to the EU and access their assets. The Council of the EU calls recent elections “fraudulent”, criticising “the violent repression and intimidation of peaceful demonstrators, members of the opposition and journalists in Belarus.” Given the Belarusian government’s treatment of female opponents, it is disappointing that the Council does not advocate for the greater protection of women’s rights.

Several EU leaders have recognised Sviatlana Tsikhanouskaya as the democratic leader of Belarus and the EU has already implemented sanctions against Lukashenko. Perhaps the EU is torn between conforming to its democratic norms and advocating for peace in Belarus and appeasing Russia, Lukashenko’s most powerful ally. Avoiding a repeat of the Ukrainian conflict in 2014 is vital, especially given the EU’s reliance on Russian gas. Poland is in the EU, Belarus is not, so targets and tools for sanctions will differ. Nevertheless, the EU cannot simply turn a blind eye to the human rights abuses happening within and outside of its borders.

On the whole, women in both countries face threats to their autonomy, whether that’s the rights to free speech and independent political thought in Belarus or abortion in Poland. In both cases, state control results in democratic backsliding and gender-based violence.

We are also seeing the resurgence of old geopolitical divisions. Both are former communist countries, with different contemporary relations with Russia. Poland is vehemently anti-Russian but appears torn between assimilation with the rest of the EU and opposing Brussels, spurred on by its dominance in the Visegrad Group. Belarus’ alliances are pro-Kremlin. From a historical perspective, Belarus shares orthodox ties with Russia and Ukraine, but recent protests suggest citizens may be more inclined to form ties with democratic western Europe. In these cases, we are seeing former communist countries becoming more authoritarian. Issues of democratic backsliding are not as pronounced in western Europe, raising the question of whether the European Union has successfully assimilated all of its member states and whether it may be able to do the same with Belarus.

Here, ongoing political disputes intersect with patriarchal dominance. In the two states, women are firmly at the heart of anti-government protests. They are among the worst-affected, but also the ones who should speak up, advocate and propose solutions when they can. Women must be able to advocate for their rights and for those of their fellow citizens.

History shows us how women’s movements have changed the world. They have led to almost universal suffrage, allowing today’s women to enjoy more freedom than those who went before them. In both Belarus and Poland, the internet has spurred on opposition movements. It has allowed women and other marginalised groups to organise, share news and strategies for change. It gives the younger generation a voice. It also allows protesters to broadcast their stories around the world, putting international leaders under pressure to act. However, millions of women continue to see their rights threatened.

Ultimately, the experiences of women in Belarus and Poland are part of the wider global issue of violence against women. UN Women states that one in three women worldwide experience some form of sexual violence, with the Covid crisis triggering a shadow pandemic of domestic violence. Most recently, Turkey has withdrawn from the Istanbul Convention. As we have seen with Belarus and Poland, legislation is key. It can grant women the rights they need but easily take them away. Governments have the power to protect women from violence, or they can sanction it.

Unfortunately, I don’t have the perfect answer. This requires the expertise of someone far more knowledgeable than I am and a global push for gender equality. What I do fear, however, is that the rights of women are being ignored while the EU is distracted by Brexit and the Covid crisis. At this year’s Commission on the Status of Women, Judicaelle Irakoze, Executive Director of Choose Yourself, said that women are among those who suffer the most during a crisis. Women in Belarus and Poland have had to contend with simultaneous health and democratic crises, risking their autonomy to protest. They are the ones most likely to suffer, but also the ones best placed to make a change.