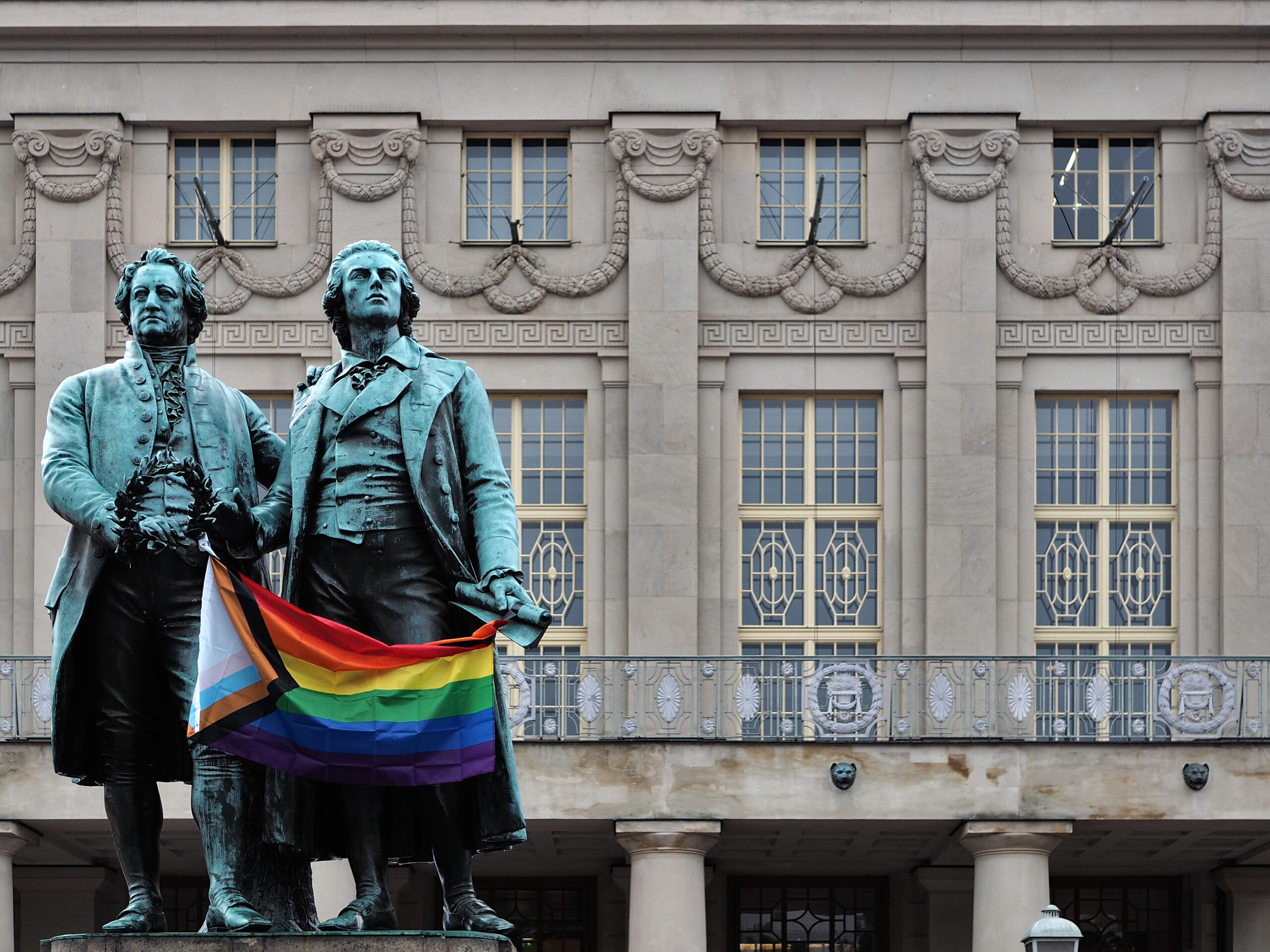 It’s the end of the pride month. So, as we watch the rainbows being taken down from corporate logos, sidewalks and the flagpoles in front of public offices, it’s worth discussing how much of a safe haven Europe actually is for LGBTQ+ refugees seeking asylum from persecution in their country of origin.

Going from big to small, I want to first take a look at the changing judicature at the European Court of Justice and European Court of Human Rights relating to LGBTQ+ asylum seekers, subsequently discuss the specific issues queer refugees face within the asylum system and end on a more general analysis of how Europe’s treatment of LGBTQ+ refugees ties in with political movements instrumentalising queer issues for solidifying a progressive-western narrative.

The European Courts and the queer identity

First of all, it is important to distinguish between the judicature of the European Court of Justice and the asylum cases that are being decided by the European Court of Human Rights. For starters, the ECJ cannot be addressed directly by an individual and therefore only decides individual cases when they are brought forward by a member state. It can still play an important role in improving the experience of LGBTQ+ refugees in the asylum system by favourably interpreting existing EU laws. These rulings are binding for all member states. The ECtHR on the other hand allows anyone to bring forward a case who claims that their rights, laid down in the European Convention on Human Rights, have been violated. But these rulings are only binding to the state to which the individual case pertains.

The division here is quite fundamental, as the ECtHR judges persecution on the grounds of the European Convention on Human rights, and more specifically in asylum cases on Article 3 ECHR. Article 3 ECHR, states that “No one shall be subjected to torture or to inhuman or degrading treatment or punishment”. Over the years, the court’s judicature has established Article 3 as the universal standard for evaluating human rights violations. If the rights violations being articulated by a claimant are not within the scope of Article 3, they are not very likely to result in a successful asylum claim. This practice has been described by the court as “playing the game”[1], an idea relevant to refugees seeking asylum on grounds of their religious believes as well as a queer identity. It is the idea that claimants can be reasonably asked to try not to trigger oppressive responses to their religious, sexual or gender identity by trying to live under the radar.

In the case of two Pakistani Christians, the court argued that “(o)n a purely pragmatic basis, it cannot be required that an expelling Contracting State [an EU-member state] only return an alien to a country where the conditions are in full and effective accord with each of the safeguards of the rights and freedoms set out in the Convention”. Only if the rights violations (here of the freedom of religion) reach the level of Article 3 it would suffice as grounds for a claim to asylum. The very nature of human rights, their universality is being questioned here as they’re being reduced to a regional commitment.

The same strategy of making claimants “play the game” is applied in asylum cases pertaining to queer identity. Similar to the rights structure of freedom of religion, the right to not be discriminated against on the basis of a queer identity can be structured in two layers: A forum internum, a sphere of personal conviction and self-definition, and a forum externum, a public sphere including the right to practice your believes or express your sexual or gender identity without being persecuted. Until 2013, the European courts argued that an asylum seeker could be reasonably asked to limit his religious belief as well as his gender/sexual identity to the forum internum. This judicature changed in 2012 and 2013 with two precedent-setting rulings by the ECJ. In a first step, the court established, that claimants couldn’t be asked to limit their religious freedom to the forum internum. The second decision then overturned the German practice of denying queer refugees asylum by arguing that they could avert persecution by hiding their sexual/gender identity. To let the court speak for itself:

“The fact that he could avoid the risk [of persecution] by exercising greater restraint than a heterosexual in expressing his sexual orientation is not to be taken into account in that respect.” It expressly held that “the competent authorities cannot reasonably expect, in order to avoid the risk of persecution, the applicant for asylum to conceal his homosexuality in his country of origin or to exercise reserve in the expression of his sexual orientation.”[2]

Even though it is a good thing that this exclusionary judicature has come to an end it is important to recognise the impact it has had on legal discourse as well as the lived experiences of queer refugees. There still are severe issues within the member states when it comes to actually implementing this changed praxis. Instead of rejecting asylum claims on the grounds that the claimants could try to live out their queer identity in a discreet fashion, the authorities switched to evaluating whether a claimant was likely to express their sexual or gender identity in a way that could lead to persecution and therefore rights violations falling under Article 3 ECHR.

It doesn’t seem like the idea, that “some fundamental rights are, actually, not fundamental because facilitating their violation by removal (of the asylum seeker from the EU) is not in violation of these rights”[3] is going away soon. It is an idea deeply entrenched within the European asylum system, placing the burden of proof excessively on the individual refugee.

This is especially problematic in cases concerning queer refugees who have oftentimes been forced to prove their sexual and gender identity with little to no regard for their privacy and safety. A policy which has been officially outlawed by the ECJ in 2014 but continues to shape asylum procedures. In the course of trying to prove their queerness many refugees get caught in an impossible limbo between the danger of being outed to their nation’s authorities by asylum-agencies in the EU and trying to make a sound case for the persecution they faced on the basis of their sexual orientation or gender identity to prevent having their claim rejected.

There is a staggering lack of research on how many refugees seek asylum on the grounds of persecution for their queer identity within the European Union, but that is not the only reason why the numbers are very hard to pinpoint.

A general lack of consideration for existing stigmata surrounding sexual and gender identities in the respective country of origin leads to many refugees not disclosing their queer identity, at least not at the beginning of the asylum application process. Disclosure later on in the process often leads to a rejection of the claim, even though the ECJ has ruled that this cannot be a sufficient reason to refuse a refugee status application. This ties in with structural issues in the training of asylum personnel, who often either don’t know how to ask the right questions and/or are guided by their own internal biases. Queer refugees face high levels of discrimination, taboo and violence in reception centres, and should therefore receive special protection under EU Directive 2013/33/EU. But countries are often lagging behind in implementation. One example can be found in Germany. A study from 2020 showed that only nine out of 16 federal states in Germany had violence protection concepts in place for their state-run refugee-shelters. Not even a third of the measures described in the “minimum standards” for the protection of LGBTI refugees can be found in these concepts.[4]

This lack of safety and protection for LGBTQ+ refugees are intensely detrimental, but it shouldn’t be a surprise. Because as much as Europe likes to be associated with progressivism, enlightenment, human rights and democratic values it very clearly becomes apparent in asylum law that this commitment to human rights is not an unconditional one.

For many European countries, their history of anti-LGBTQ+ legislature is neither very old nor in some cases history at all. On a European level, sexual orientation was first specified as a category for which people might face persecution in 2011. Still, western values often get contorted with a hollow sense of solidarity with the LGBTQ+ community that doesn’t actually translate into action to protect and support people within this community, especially those most marginalised, like trans-people, people of colour or refugees.

To come full circle here I want to end with a quote by Trans-YouTuber Abigail Thorne, who said: “how much dignity can I live in if I don’t have equal rights?” Because as pride is ending it is important to remember that queer pride is not mainly about hoisting rainbow flags and celebrating LGBTQ+ representation in the media but it is about remembering those queer people in history who organised and went out on the streets, not to ask for respect, but to demand their rights. It is about honouring that history, by continuing to claim these rights. Both on the streets and in the courts.